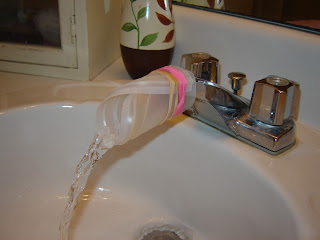 The other day I was reading a parenting magazine and happened to see an ad for a plastic extender you can put over your bathroom sink's faucet.  That way, the stream of water hits closer to the front of the sink so little hands can reach it better.  I thought this was the best idea, since even with his new stepstool, my son still can't get his hands underneath the water.  And currently washing his hands is one of his favorite things to do, so I wanted to keep it that way!

I looked up the product online, but it was 12 or 13 bucks plus shipping.  And I actually considered purchasing it.  But I decided to let the idea marinate for awhile and search the web to see if there was a way to make it myself (one blog suggested using a jar opener and an old hair-tie!).

This afternoon, it dawned on me.  Use a plastic container lid!  The cheap, throw-away kind so it's nice and bendy.  And yes, bendy's a word.  Anyway, I grabbed an old lid (complete with spaghetti sauce stains...nice) and a thick rubber band and started playing around. 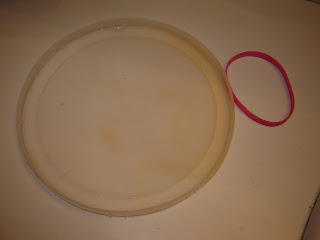 First, I trimmed the lid a bit since I knew it didn't need to be that big. 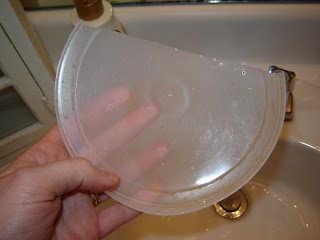 I actually trimmed it down a few more times until I got to a size that I was happy with.  I just kept wrapping it around the faucet and then turning the water on to see how it flowed.  The trick is to not put it that far back since that can make the water flow backwards, but also leave a slight tilt downward at the end so all the water can flow out and not get hung up in there.  In the end, I used a second rubber band to make sure it would stay on better. 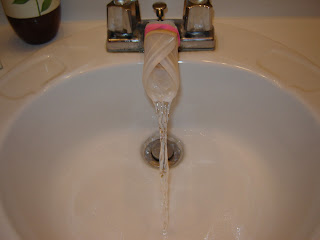 I think it works fine for now though.  It's not on there super-tight (a feature I probably would enjoy with the store-bought one!), but I figure that will just make it easier to remove when we have guests over, since the guest bathroom is where we brush my son's teeth and wash his hands.

So there you go.  Five minutes and zero cost.  At least I got that going for me.  :o)

Promote Your Page Too